This is my second season to overwinter with the JSB Hublock fitted.

My single axle van has two locks fitted and gives me complete peace of mind as to my caravan's security.

It's the professional thief who goes equipped to steal, who with a "hot spanner" will defeat all high street security devices.

These Hublocks replace your wheels which can be taken home along with the spare.

Hi guys, we've just bought one of your JSB Hublocks, a very impressive and substantial piece of kit.

We went shopping after a couple of shifty looking chaps were seen looking around our caravan after midnight last night. We already have an SAS wheel clamp (Sold Secure Gold) and an ALKO Hitch Lock, both of which I think can be cut off with an oxyacetylene cutter, but they were the best available at the time.

By the look of your Hublock I would think it's just about bomb proof. It's taken me 15 minutes to fit, that's from getting all the equipment out, to having it all put away again, easy peasy with the stainless steel wheel hangers.

To anybody out there wanting peace of mind, I would think this is as good as it gets.

P.S. Don't suppose I shall ever know if it works or not, unless someone's stupid enough to have a go with a gas torch.

I think anyone seeing this thing would just walk away.

Caravan thieves are back in the area and they came to pay us another visit. They came tooled up for the job with six men and three white vans. They got a good deal the last time they came, the father in-laws caravan was stolen at the same time as ours.

The police think it's the same team.

This time they were disturbed by the father in-law next door who was checking his caravan. After making up some excuse they went, however not before noticing the JSB Hublock that we both have on our new caravans.

They haven't been back since, but it's only been a week, and two caravans have been stolen not very far from us.

I'm not going to stop in worried if they do though, they've seen the Hublock and they did get a good look at it.

I looked at the JSB Hublock website with interest, and being a mechanic by trade (currently running a HGV workshop) I really believed I would be able to remove this device. Every type of wheel clamp without exception can be cut off with an oxyacetylene cutting torch in less than a minute. Ground anchors have chains which can be cut through in seconds, hardened or not. Hitch locks are overcome by towing your caravan away using a chain wrapped around the lock and 'A' frame.

Tracking devices may get you your van back but they won't stop your caravan been stolen.

Secure storage is expensive and is not always convenient or secure.

Sold Secure Gold awarded devices will only resist an "opportunist" attack for five minutes, and this doesn't include oxyacetylene cutting, as they would not last 60 seconds.

Today I went to see the JSB Hublock in the flesh. This lock is superb!​

I don't think a caravan with one of these fitted could be towed away inside three to four hours (six to eight hours for a twin axle with two fitted). They may not be removeable anyway.
This is not an advertisement for this product, just my honest opinion after having seen it for myself. This is the only product I have seen that I believe would stop my caravan being stolen.
Nothing is impossible to overcome but this will take hours to remove, so the thieves will always pick an easier target.

I bought the JSB Hublock in 2005 just after my Hymer caravan was stolen, in broad daylight from the side of my house. My neighbours caravan had been similarly stolen six days earlier but no one had informed me.

In both cases the wheel clamps and hitch locks had been cut off with oxyacetylene cutting equipment which I was later told would have taken about 30 seconds.

I had quite a bit of correspondence with the caravan club about the fact they did not seem to want to endorse your product.

More importantly my new caravan has not been stolen so the JSB Hublock does work. It is easy to fit, and if I were a caravan thief I wouldn't even attempt to remove this device. I would target caravans fitted with the usual (ineffective) wheel clamps and hitch locks instead.

The JSB Hublock does look as if it means business.

If you want the best, then JSB Hublocks are the way to go. Apparently there has never been a caravan stolen with the JSB Hublock fitted, and they are the only caravan security device that is impossible to remove with oxyacetylene.

Due to the design of the hublock you can't get a removal socket onto the head of the security bolts.

The only downside is you need to jack up your caravan and remove the wheel/wheels on one side of the caravan, so for a single axle just one wheel.

Most people use the JSB Hublock for storage, however with practice and the right tools they are possible to fit quickly.

I have a Hobby 620cl twin axle and therefore have to fit two JSB Hublocks, but I can fit the pair of them in about 6 or 7 minutes.

I use mine when touring as I don't find them a hastle to fit.

I have no association with the company, but they are probably the best security product you will ever find for your Hobby caravan. 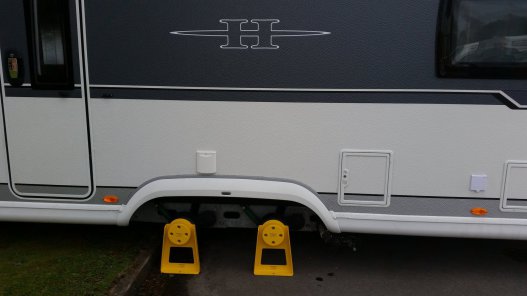 A couple sank £30,000 retirement savings into a dream caravan that got nicked - but cops say "human rights" mean family caught living in it cannot be removed.

"We have no legal power to recover the caravan", say police.

The caravan was stolen from a secure storage site where the thieves disabled the alarm and cut through a wheel clamp and lock.

The caravan was uninsured at the time of the theft as the owners were between policies.

"They Stole Our Caravan In Broad Daylight".

An edited version of CCTV film of an actual caravan theft.

Most thefts are completed well within ten minutes and alarms are disabled in less than five seconds.